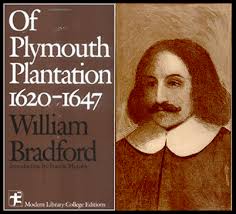 We all remember being taught the story of the First Thanksgiving. What most don’t know is that much of what we were taught is myth. But, as in most things, the real story is more interesting than the fable. The Thanksgiving story is more about an early form of Communism than it is a warm and fuzzy story about cooperation between the colonists and the Native Americans.

One thing we should get straight from the outset; Thanksgiving to the Pilgrims was not a time for feasting – it was a time for fasting, prayer and gratitude toward God. They had many times of Thanksgiving, but the feast about which we have been taught was not one of them. The idea of referring to the harvest meal the Pilgrims shared with Indians as “Thanksgiving” was an 18th century invention – 200 years after the fact.

In part, what we have been taught is true. The Pilgrims’ first winter in frigid New England was indeed terrible. Out of roughly 100 Pilgrims half had died, including 13 of the 18 wives. In his diary, Governor William Bradford painted a picture of destitute settlers selling their clothes coverings for food while others "became servants to the Indians, cutting wood and fetching water in exchange for a capful of corn."

Had it not been for the the Indians, all of the Pilgrims might have perished. They taught the Pilgrims to farm. What was in it for the Indians? The tribe who helped the Pilgrims was named Wampanoag (“the eastern peoples” in their language). They were a weak tribe in constant conflict with other tribes. Their alliance with “the coat people” (their name for the settlers) strengthened their standing. They also benefitted from trade.

They were happy to trade otter skins for steel knives and axes. After all, since the otters were so plentiful, they were worthless to the Native Americans. But the steel implements were invaluable. So both groups benefitted from their association, and the Indians had good reasons to help the settlers survive.

The harvest meal in the autumn of 1621 was meager, because most of their crops failed. And the mood was not joyous. After all, half their number had perished in the months since they had landed. But they were grateful that they were alive, and thankful for what little they had. This meal, attended by 53 Pilgrims and 90 Native Americans has come to be known as Thanksgiving Day.

Their second harvest was not much better, and the third also failed – in spite of the fact that their Indian neighbors had great crops. The Pilgrim leadership finally started seriously praying about what they were doing wrong. Certainly the climate for much of the year was inhospitable, and none of the Pilgrims were trained in agriculture. But they came to a surprising conclusion: their economic system was unbiblical – and it was killing them!

You see, the Pilgrims were the early Communists. This is not my conclusion – it is the conclusion of William Bradford, who was elected their Governor 30 times. Let me introduce you to the only definitive and accurate history of that time. And let me assure you that in this area, as well as many others, the “history” books from which your children learn are politically correct hogwash.

Bradford’s book was something of a journal, beginning 12 years before the arrival in the New World. It chronicles the persecution of their denomination, which caused them to first move to Holland where they were freer to practice their religion, and eventually to America. So it would be accurate to say that King James I of England set the events in motion that produced one of America’s favorite holidays. Bradford’s diary has been as a a book. It has had several titles over the years as it has been re-printed, but the first title was “Of Plimouth Plantation” (the original spelling). In his opening he describes why he wrote the book:


“My purpose is that their children may see with what difficulties their fathers had to wrestle in accomplishing the first beginnings; and how God ultimately brought them through…”


Back to Communism in the Colony. In describing how desperate the economic situation of the Colony had become under its early version of Communism, Bradford says in his book:


“Let none argue that this is due to human failing, rather than to this communistic plan of life itself. I answer, seeing that all men have this failing in them, that God in His wisdom saw that another plan of life was fitter for them.”


John Carver was the first Governor of the Colony when the Mayflower Compact was signed on November 11, 1620. When he died six months later, he was succeeded by Bradford. Both had been bound by rules set down by the investors who paid for the ship and sailors who brought them to New England, and provided their initial supplies. The investors insisted that everything be owned communally, and that everyone receive compensation equally, regardless of their efforts. The Pilgrims readily agreed to this, seeing it as a remedy to what they perceived to be an overly competitive environment in their native country, England.

Their Socialistic creed was “Each according to his need, not according to his deed.” They were way ahead of their times. Karl Marx didn’t articulate this concept until more than 100 years later.” It didn’t work any better for the Plymouth Colony than it did for the nations that later adopted Communism.” Again, let’s hear from the man who observed the whole failed experiment:


“The failure of this experiment of communal service, which was tried for several years, and by good and honest men proves the emptiness of the theory of Plato and other ancients, applauded by some of later times. That the taking away of private property, and the possession of it in community, by commonwealth, would make a state happy and flourishing, as if they were wiser than God.

“In this instance it was found to breed much confusion and discontent, and retard much employment which would have been to the general benefit and comfort. For the young men who were most able and fit for service objected to being forced to spend their time and strength in working for other men’s wives and children, without any recompense. The strong man or the resourceful man had no more share of food and clothes than the weak man who was not able to do a quarter the other could.  As for men’s wives who were obliged to do service for other men, such as cooking, and washing their clothes, they considered it a kind of slavery, and many husbands would not brook it.”


There was tremendous acrimony among these normally peaceful people because of the inequality of labor and reward. Also, much-needed supplies that were due from the investors never arrived. With the Colony on the brink of extinction, Governor Bradford and the Colony's leaders decided they would abandon the Communistic system that had been forced on them. They gave a plot of land to each family. They prayed that an economic system of private ownership of land would encourage the people to be self-sufficient and produce more and better crops. Of course it worked, because Free Enterprise is scriptural:


"This had very good success, for it made all hands very industrious. Much more corn was planted than otherwise would have been by any means the Governor or any other could have devised, and saved him a great deal of trouble and gave far better satisfaction. The women now went willingly into the field, and took their little ones with them to plant corn, while before they would allege weakness and inability; and to have compelled them would have been thought great tyranny and oppression.

"By this time harvest was come, and instead of famine, now God gave them plenty, and the face of things was changed, to the rejoicing of the hearts of many, for which they blessed God. And the effect of their planting was well seen, for all had, one way or other, pretty well to bring the year about, and some of the abler sort and more industrious had to spare, and sell to others, so as any general want or famine hath not been amongst them since to this day."


So after three years of communal living and the famine that nearly wiped out the Colony, the new system of Free Enterprise brought an era of agricultural abundance that allowed the settlers to prosper and play a vital role in establishing the truth of American Exceptionalism.

To summarize: Early on the colonists were under a Communist form of government. Just as in any other nation that has adopted this ridiculous economic path, the people were not motivated to work. The lazy people took as much from the community as the ones who worked. Over time the hard workers slacked off. What was the use of working hard?

When each family was forced to support itself, suddenly everyone worked harder. Bradford relates that even the women gladly went into the fields to help support their families, whereas before they complained about doing work for “the community.” After Free Enterprise was unleashed, the very next harvest, their fourth, was far more bountiful than all the previous harvests combined. After that harvest they had a REAL feast. Bradford continues:


“It was to the astonishment of many and almost to the wonder of the world, that from so small a beginning such great things should ensue, as in due time was manifested; and that there should be a resting place for so many of the Lord’s people here, when so sharp a scourge had come upon their own nation [England]. But it was the Lord’s doing, and it ought to be marvelous in our eyes.”


The real miracle of the first Thanksgiving was that the Pilgrims learned what they should already have known. The Bible says, “The one who is unwilling to work shall not eat. We hear that some among you are idle and disruptive. They are not busy; they are busybodies. Such people we command and urge in the Lord Jesus Christ to settle down and earn the food they eat." (2 Thessalonians 3:10-12)

We have so much for which to be thankful. I remember one Thanksgiving Day when a friend saw me working on a construction job. (Our family was having dinner later in the day.) He asked me why I was working on Thanksgiving. I responded that I was thankful I had work! If you have a job, and particularly if you are blessed with abundance, show your thankfulness by sharing with others less fortunate. This is what the Bible teaches.

It does not teach forcibly taking from some who work and giving it to others who refuse to work. I consider it a joy to give to people who are genuinely unable to provide for themselves. The Bible calls that “giving alms,” and it is something we are commanded as Christians to do. But the Bible also says that we should not give to those who are able to work. When they get hungry enough, they’ll go get a job.

Unfortunately, our nation has become a giant version of Plymouth Colony. We need to elect leaders who, like Governor Bradford and the other leaders of Plymouth, are smart enough to see the danger and change the course of our nation.