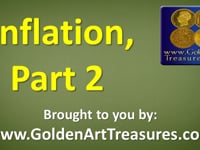 More than any other factor, the cancer of inflation has destroyed the value of millions of people's savings, as well as retirement & college plans. It has also caused formerly prosperous nations to fall into economic ruin. As good stewards, we need to do two things:

1) Invest in a way that will BENEFIT from inflation, rather than being destroyed by it.

2) Elect representatives (federal, state & Local) who understand that "The debtor is slave to the lender" (Proverbs 22:7),and that our crushing National Debt is destined to trigger the greatest hyperinflationary event this nation has ever seen.

Rare Gold coins are one of the world's best investments. We have developed a comprehensive strategy to build a collection that could collectively be worth a Billion dollars. In this plan each individual owns and holds their own coins, which make up part of the overall collection. We invite you to join the unique VIP group that is building this collection. Every week we offer a different webinar to help explain the Blueprint for a Billion Dollar Gain.