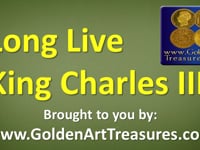 We all mourn Queen Elizabeth's passing. I personally thought that she might surpass her mom's longevity of age 102. Her unexpected passing has brought an incredible chapter in history to an end. It has also brought the end to the world's greatest modern coin series. To commemorate this event, Greg has written the encyclopedia reference book, 5 Guineas and 5Pounds, the King of Coins. We expect the future value will be great for these treasures.